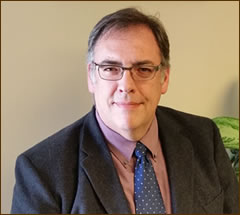 Andrew has been a practicing attorney for 22 years, both in the private and public sector and brings his broad experience and commitment to service to the firm.

Before moving to Whidbey Island, Andrew served as the Chief Prosecuting Attorney for Missoula, MT. He supervised the criminal division of the City Attorney’s Office along with prosecuting several thousand cases, gaining experience in police investigation and procedures, criminal law (including domestic violence and DUI), trials and appeals, and government administrative law.

Originally from Hopewell, Virginia, Andrew relocated to Whidbey Island, with a 25 year layover in Montana. During those 25 years, Andrew graduated from the University of Montana in 1994 and worked for small firm in Missoula representing clients in Federal and State courts. It was during that time that he met his wife, Tara and became a father to their daughter Malia. In 1999, he opened Scott Law Offices and added family law and estate planning to his practice, as well as a daughter, Jillian, to the family. In 2001, Andrew joined the Missoula City Attorney’s Office and Kyle joined the growing family. The entire family is excited to move to Whidbey (although Malia is stuck in Central Washington with the grandchildren). So far, the only other addition to the family being considered is a new puppy.

Andrew has conducted over 3000 trials with over 75 being jury trials. Andrew also has experience in family law, personal injury, disability claims, estate planning, and business law.

How to work with us
We will be glad to provide necessary legal assistance.
1   Schedule A Call

Please submit your contact information in the form to schedule a call with our team to discuss your case. Our team will then reach out to find a time that works best for you.

After you’ve spoken with Andrew Scott over the phone, it may be necessary to have an in-person appointment to discuss specifics. Our team will schedule that appointment if necessary.

After thorough review, if we believe we can help you with your case, we will begin working together on finding and executing the solution.

Use the form below to schedule a call.

We are always ready to help you

Copyright © 2022 afscottlaw.com . All rights reserved | Website by SERP Co
Disclaimer: Facts and legal circumstances of each client are different. I cannot guarantee the same result in your case, however, I will try my hardest to get the best result possible for you. © Law Offices of Andrew F. Scott and Associates, PLLC. All Rights Reserved. Privacy Policy.